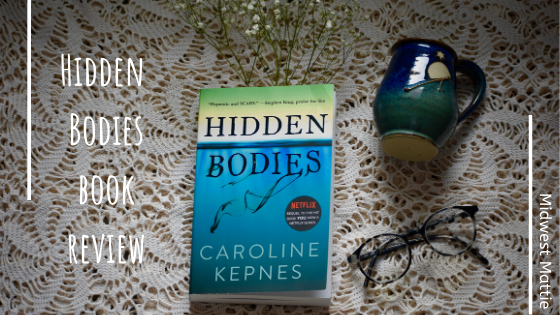 Hello, friends! Welcome. I hope that you are all having a wonderful day! In today’s blog post, I will be talking about my thought on You‘s sequel, Hidden Bodies. I will do my best to be vague in order to avoid spoilers. ❤

First things first, and I may be alone in thinking this, but I found Hidden Bodies to be a bit boring. How on Earth can a book about MURDER be boring? I don’t know, but I found myself READY to finish this book as soon as it started. Perhaps I need to try and read it again, but as of right now…

The You series is full of pop culture references, which were endearing in the first book, but in the second book I found them to be… overdone? Perhaps it’s because in the first book Joe made references to movies, books, and music, and in the second book he seemed to relish in name-dropping celebrities, as if to remind us, time and time again, that we are not in New York anymore. Some of the references seemed to be there just for the sake of being there, they didn’t seem to serve a true purpose. I think making pop culture such a big part of any story can be a double-edged sword, because while it can make a book more relatable and make a character seem more like a real person, it can also date a book terribly, or even turn people off from the book entirely. Perhaps I’m alone in my thinking, but the pop culture references in this one felt a bit heavy-handed.

I talked in my last post about how nauseated I felt reading You. This book… not so much. There were still parts I found unsettling to read, but this book almost felt like a parody of the first one. Joe’s murderous moments felt almost like a Tom and Jerry episode, losing any of the intensity they once had.

*SPOILER* One of Joe’s biggest concerns throughout both books is being discovered by his love interests, but when Love finds out about his murderous tendencies… she just, doesn’t care? There is no dramatic reveal, he simply tells her and she’s almost immediately okay with it. I think the idea of making Love okay with him being a serial killer is an interesting route to take, but I wish that it would have been more dramatic of a moment.

I’m trying not to add too many spoilers in this review, so I apologize in advance for my vagueness, but the ending… oh my goodness, the ending. The ending should have had me on the edge of my seat, but instead, I felt apathetic and ready to be DONE with this book.

I generally add a section at the end of my book reviews with the quotes I enjoyed in the book, but I can honestly say that I made it through the entire book without finding a single quote I found to be remarkable.

Based on the reviews I’ve read online, people seem to be half and half with this book. I feel so incredibly guilty writing such a brutal review, but I think there’s no point in writing one if you’re not going to be honest. That being said, I am sorry that this one came out so negative.

I read online that Caroline Kepnes is currently writing a third and fourth book for the You series. If I’m being 100% honest, I probably will end up reading them, despite my feelings about Hidden Bodies. Joe Goldberg is a very unique character and I am still interested in reading about his life. I have not given up hope on this series, my fingers are crossed that the next few books will reclaim some of the magic that the first one had.

There are so many different aspects of the book that I could touch on, but I fear that this review is a touch long-winded as is, so I will sign off right about now. Have any of you read Hidden Bodies? What did you think of it? Should I give it another shot?