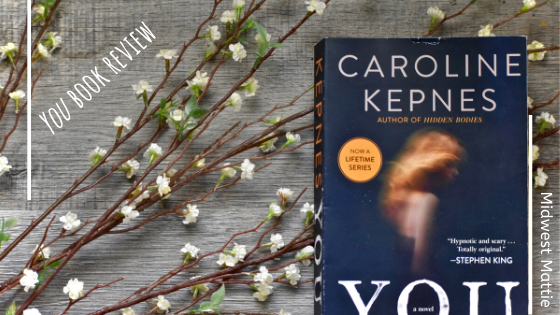 Hello, friends! I hope that you are all doing well this week. In today’s blog post I wanted to write a little bit about my thoughts on the book You by Caroline Kepnes.

I found myself laughing a bit while buying this book, because I could only imagine the pretentious narration that would accompany my purchase had our narrator Joe Goldberg been the one to ring me up. I have no doubt that he would have been thoroughly disappointed that I was buying the book AFTER watching the show. The horror!

Like a lot of people, I first heard about this book series because I watched the show on Netflix. I really enjoyed the show, despite being heavily disturbed by it. I had no idea that I would find the book to be far more sickening.

The book is told from the perspective of Joe, a seemingly mild-mannered bookstore manager. He finds himself fixated on Guinevere Beck, a young writer earning her MFA in New York. Joe’s devotion to Beck is all-consuming and what follows is a story of lies, obsession, and plenty of pretentious commentary on today’s society. The reader finds themselves all too willing to travel down the rabbit hole. Joe is an unreliable narrator through and through reminding me of Humbert Humbert from Vladimir Nabokov’s Lolita.

Before getting too far into my review, I will note that scandalizing me is quite easy, so it probably doesn’t mean much when I say that I found myself scandalized by this book, but I will say it all the same. I was so scandalized that even while I was reading this book ALONE, I found myself getting embarrassed. Kepnes utilizes incredibly crass language for Joe’s monologue, which is a smart choice for the character, but I will admit that it made it a bit hard for me to read.

This book kept me interested the whole way through, reading it felt like watching a horror movie through splayed fingers. I wanted to know about Joe’s antics as much as I absolutely did not want to know about them.

Caroline Kepnes did a superb job of writing characters that were generally very unlikable, all while managing to make them interesting enough where you still wanted to read about them. Joe’s inner monologue, while generally being quite nauseating, made me smirk every so often, because while I found most of his commentary to be overtly pretentious, I also found myself relating to some of his observations. It takes a skilled writer to make you want to read about characters that you really don’t like.

One thing that I found to be interesting in this book is that there were so many different levels of bad people in You. Beck is a character that certainly makes plenty of mistakes, but compared to Joe, she’s practically an angel. It’s also very interesting seeing Beck from Joe’s point of view, as she is either the most virtuous, intelligent, and important woman in the world, or she is the most idiotic, vapid, and cruel one. No in-between. He’s not able to see her as a real person, and as a result, it makes it a little bit hard for us to see her as one.

I found myself incredibly entertained by this book, but I don’t think it’s going to be a book that I will read again. I think that much of this book’s allure is in its mystery and suspense, once you know what transpires, you’re less likely to pick it up again. This is, of course, all just my opinion, and I welcome any differing ones! ❤

“Charlie looked like he was always recovering from a Dave Matthews concert.”

My closing remarks for anyone who finds themselves wishing that Joe Goldberg was their boyfriend while watching You on Netflix… read the book! It will remedy that immediately. I PROMISE.

Thank you so much for reading, my friends! Have you read You? What did you think of it???

One thought on “You Book Review.”