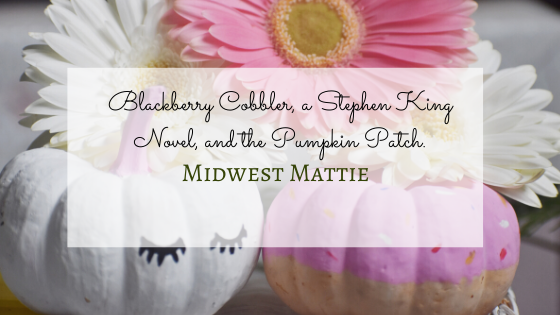 Hello, my dear friends. I fear that I was a bit impulsive in my last two posts, saying that I was “back”. I am back, but perhaps not in the way I intended. In my blogging tips post, I talk about the importance of finding a blogging schedule that works for you. And I still stand by that, but I had been sacrificing the quality of content just for the sake of my schedule. I don’t want to do that. I want to post three times a week, but I don’t want to force a post out of the oven if it isn’t ready yet.

Over the weekend, Bobby’s family came up to visit, and we made a trip to the pumpkin patch! We had such a lovely time, and afterwards, we painted our pumpkins. Painting pumpkins instead of carving them is revolutionary, at least in the pumpkin decor world. Not only did we paint pumpkins, but we also did a corn maze. I hadn’t done one since middle school, and I think that this one was quite a bit larger. I’m glad that I wasn’t alone in this corn maze, because my sense of direction is horrendous.

The pumpkin patch owners’s dogs were also wandering around the patch, and they were all so friendly and kept coming up to say hello. We enjoyed their company while we sat at a picnic table, drinking apple cider and eating cinnamon sugar donuts.

I also made the most delicious blackberry cobbler for when they visited. I can’t really take much credit for it, as it was a Pioneer Woman recipe, but I definitely wanted to share the recipe with all of you. It contains self-rising flour, which I admittedly never heard of before. I read that you can buy self-rising flour at the store, but I used this recipe to make my own. We paired it with some french vanilla ice cream and a cup of coffee for an after-dinner treat. I have such an excess of frozen blueberries, so I made a blueberry cobbler yesterday, using this recipe again. Bobby liked the blackberry one the best, but I think that I liked the blueberry one the best. It tasted a bit like a blueberry pancake. Speaking of pancakes, I think that this cobbler would also be delicious for breakfast, paired with eggs, and again, a cup of coffee.

Over the weekend, I finished the book I had been reading, Stephen King’s Thinner. I don’t think that I’ve ever read a Stephen King book before, although I have seen a couple of the movie adaptions of his books. Apparently, there is a movie adaptation of the book, which I had never heard of. This book took me quite awhile to finish, but I found the last sixty pages to be the most exciting. And that ending! My goodness.

This post is a little bit scrambled, but I enjoyed writing it quite a bit. I think that it’s sort of like a mini monthly favorites. It’s a nice way to document the things that I do, and the things that I like. It feels a bit more personal than some of my other posts. Perhaps I’ll do more of these in the future!

I hope that you enjoyed it, my friends.