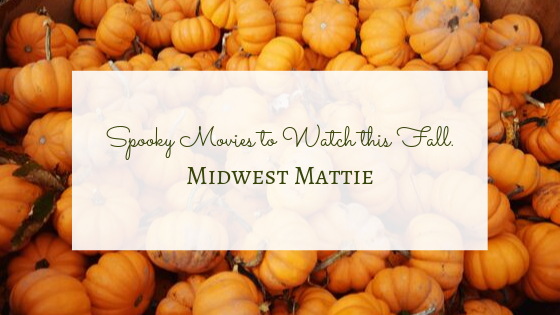 Hello, friends! A happy Wednesday to you all! (It was Wednesday when I began writing this post, but as per usual, time got away from me… and now it’s Thursday. Oops!) It is officially autumn! And that means plenty of flannel, pumpkin patches, and SCARY MOVIES.

I know that most people have VERY strong opinions about horror movies, so I am a bit nervous compiling this list. I just want to preface this post by saying that it’s okay for us all to have differing opinions! I am also certainly not the most knowledgable in the horror genre, but I really do enjoy it. I will say that I tend to like movies that are more on the paranormal side, as opposed to most slasher films that contain a lot of gore. So, keep that in mind when reading this list!

Thank you so much for reading, my friends! And happy fall to you all! ❤

Stacking wood definitely means it’s getting to be fall soon, right? In any case, Halloween decor will be coming up from the basement.
Please ignore that I haven’t gotten my hair professionally cut/colored in a year and a half. I also ask that you please enjoy us both being dressed up at the same time - a true rarity.
My love of antique knick knacks is coming in handy. I guess I’ve come to like pink and gold at least a little bit.
Made our way to Draper James today!!!
A reupload, because I’m rusty with Instagram and posted the wrong edit of this photo. We had a good time yesterday! Took a rare selfie to commemorate.
So happy that we’re to the point of the year where it’s still light at 5 PM.
Advertisements
%d bloggers like this: